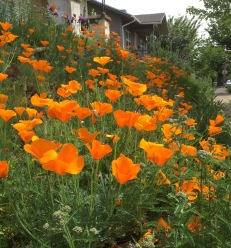 In a disused lot

Learning NOT to “see” the world as objects somehow projected into our minds but as the world itself may strip the world of value; there’s a long modern tradition that argues that values are “subjective.”  But the dualism of mind/world is unsustainable. The “I” just does not look out on the world from its lonely balcony. We only know the world as we learn to talk about it: language is always part of what we observe. And so we talk about the “grammar” of experience and the “textuality” of experience.

And we still do “experience” value in the world. Words like “good” perform well in many contexts: a good cake, a good person. “Good” is a “perfection term.”  Perfection terms adapt to many circumstances without losing their usefulness– quite the contrary. As models of excellence (“paradigms” in Stephen Mulhall’s THE GREAT RIDDLE), they are “indefinitely perfectible (without ever reaching a state of perfection), and they are inherently capable of being projected into new contexts” (82).

I think certain “images” do the work of perfection terms. Like such terms, the images have contexts; they are paradigms, or models of excellence, within a “world.” But they project “perfection” and so connect the scene they appear in to a larger and larger frame of reference. Poems showcasing such imagery are fascinating.

Placing the golden poppies in a “disused lot” allows the force of perfectibility to act on the emptiness of the lot. This is a trope we see in Wordsworth; the overlooked flower. A forgotten spot nourishes “perfectibility”; because we are wandering and not focussed on practical tasks at the moment, we discover the poppies and in the poppies experience a kind of perfection. Wordless, it would seem; but as we understand the use of perfection terms, the difference between word and image becomes equivocal at points. This is to be discussed! Anyway:  The poppies act on the analogy of a perfection term. Haiku is particularly given to such experiences since it springs from a meditative state of mind, but that’s, again, another story.

Tom D'Evelyn is a private editor and writing tutor in Cranston RI and, thanks to the web, across the US and in the UK. He can be reached at tom.develyn@comcast.net. D'Evelyn has a PhD in Comparative Literature from UC Berkeley. Before retiring he held positions at The Christian Science Monitor, Harvard University Press, Boston University and Brown University. He ran a literary agency for ten years, publishing books by Leonard Nathan and Arthur Quinn, among others. Before moving to Portland OR he was managing editor at Single Island Press, Portsmouth NH. He blogs at http://tdevelyn.com and other sites. View all posts by Tom D'Evelyn